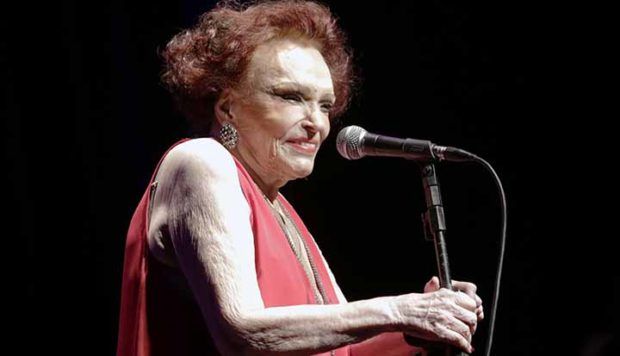 Bibi Ferreira might not have been a household name in America, where she only performed her U.S. debut when she was already 91 years old – a memorable concert that took place at Alice Tully Hall in the fall of 2013 at Lincoln Center, when she sang a selection of songs from her long career, which spanned almost her entire life – but to Brazilians she was undoubtedly the greatest diva of Brazilian musical theater, cinema and TV.

When I heard that she had peacefully passed away at 96 in her Rio de Janeiro home on February 13, I thought of all the years I had seen her perform on Brazilian TV as a presenter, singer or even director – a role she took later in her years and also her numerous recordings, ranging from soundtracks of her musicals to Natal em Familia, a Christmas album (which turned out to be her last) she did in collaboration with numerous artists from her native country, including the late Emilio Santiago and samba singer Alcione.

Ferreira ran the gamut of pretty much every medium in Brazil, going from performing the songs of Edith Piaf and Fado queen Amalia Rodrigues to directing a full opera, which she mentioned on an interview I did with her for The Brasilians Newspaper was a huge undertaking since she had to rehearse not one but two full groups because sometimes last-minute subs are necessary.

Although she had become hard of hearing and physically frail in her final years, her voice was impeccable, and she reached all the notes without a hitch, not sounding at all line the nonagenarian she was. She had great range and was a great interpreter of pretty much every style she tackled. On her second (and final) New York show at Symphony Space in 2016, she performed a retrospective of her most important shows, going from her Sinatra tribute to the much-appreciated Piaf covers – which even impressed the French when she sang there over the decades.

Cover of Bibi Ferreira: A Life on The Stage

Ferreira also released a coffee table book-sized book chronicling her career.  I was humbled to learn there was a quote from my review of her New York debut for All About Jazz. I was fortunate to have met her backstage after her second show and had my personal copy autographed – a possession I will cherish forever as a remembrance of this magnificent artist.

My quote from All About Jazz in Bibi: A Life on Stage

It is no secret that I am a fan of outdoor concerts during the warm summer months, but there is one event that I eagerly wait to come around: The Latin Alternative Music Conference, the annual event that takes place all over the city, including shows in Central Park and Celebrate Brooklyn and other select venues. Though some of the concerts are for participants only such as the various showcases, most are open to the general public – a treat for fans of Latin Alternative artists.

But what exactly is Latin alternative in the first place?  A few years ago, one editor included in an article of mine that it is basically about Latino artists that ‘don’t play salsa.’ Though for most readers back then that might have made sense, I did not really like that definition because rhythms like mambo, cumbia and salsa are actually part of the genre, just not in the traditional sense.  After all, reggaeton is the ultimate blend of a quintessentially North American genre with the sounds of the Caribbean. Aterciopelados is a rock band that incorporates traditional Colombian music into their songs, and Chilean rapper Ana Tijoux (who was by the way first showcased in America at LAMC before she broke out internationally) does not hide her home country’s influence in her rapping.  At least they are no longer calling it “rock en español,” a dreadful label that came to be in the 90s when some Latin bands broke into the pop scene in America.

The LAMC is more than just music – it’s an opportunity for musicians to network with label executives, journalists and ultimately their own peers. When I first attended about a decade ago (has it been that long?) the conference had what I would describe as more of a party atmosphere, but it has since grown up and become one of the principal opportunities to exchange ideas and try to find the answers for questions about the state of the music business today – which has been changing in breakneck speed.

During the entire conference, several panel discussions are held to look at the state of music today and how to stay current in it – I recall sitting at one panel that included professionals involved in crowdfunding, then a novel idea that not many in attendance could understand.  This year, streaming is one of the topics up for discussion. Sure, it is not exactly a new idea, but now that large companies like Amazon and Apple are embracing it, what does it mean for a struggling independent artist who can no longer rely on downloads to make a living? Their music might be featured on NPR, but that is not going to pay their bills – new music comes out at a crazy pace these days, and it’s becoming harder and harder to focus on what the next thing might be (believe me, as I write this I am trying to go through my never ending pile of music to review).

For music fans, this year’s attractions are indeed a treat. The fun begins tonight (July 8) at Central Park Summerstage, where three up-and-coming bands will showcase their music – Starting with Electronic music artist Helado Negro (Roberto Carlos Lange, who I’m guessing changed his stage name because of another popular artist called Roberto Carlos), an Ecuadoran native who now calls Brooklyn his home. His sound bears a lot of influence from his former Miami home, but you can hear a lot more in what he does.

Following him is Systema Solar, a Colombian electronic collective that (as I mentioned before) blends lots of their native sounds with more contemporary sounds – it’s not for everyone, but it is certainly innovative.  Closing the evening is Compass, a collaboration between Camilo Lara  –  a frequent collaborator to the LAMC – and Toy Selectah, a DJ and producer with a large resume that includes Morrissey and Calle 13, to name a few.  On Friday (10/7) we go to Celebrate Brooklyn for a three-part set that includes veteran Argentinean band Los Autenticos Decadentes, one of the great luminaries of their country’s pop scene for over thirty years – who apparently are enjoying a comeback.

On Saturday we return to Central Park for another great afternoon that will feature Ximena Sariñana, a Mexican breakout singer who has been crossing over thanks to her efforts in English-language songs such as “Different,” an infectious song about not conforming to expectations.

There is much more going on – just check out the schedule for further details. It is a great opportunity to get out of the American pop box and discover some new sounds. I always have a lot of fun there and am always reporting – so please follow my Twitter feed @ebarteldes for more.